In AIP-4, contributor 0xButterfield proposed increasing protocol fees directed toward auraBAL to increase veBAL intake. The proposal was ratified by vlAURA holders, and led to an uptick of over 300,000 veBAL, a definite success. However, Aura’s share of veBAL remains its key moat and efforts to increase this permanent capital should continue. This proposal outlines a further shift in fee capture to benefit Aura liquidity providers, vlAURA lockers, and auraBAL stakers long term.

Aura’s share of veBAL supply is its key moat. Thus far, Aura has accumulated just over 30% of all veBAL supply, with more locked permanently into auraBAL every day. The auraBAL staking pool was designed to help support this goal of veBAL accumulation with three sources of rewards for auraBAL stakers:

The recent increase in veBAL share by ~350,000 veBAL was driven by a proposal from Aura contributor 0xButterfield on Jul. 16. Butterfield posted a proposal that increased the overall fee take on BAL earned by Aura users to 20%, an increase from the initial 15%, and also redirected some yield from vlAURA to auraBAL.

The fee take to be split between active governance participants and auraBAL stakers (and harvesters) can be raised by an additional 5%. Per Aura’s documentation and smart contracts, there is an “absolute fee ceiling of 25%” on the BAL earned by depositors of BPT on Aura.

Aura should seek to use this additional flexibility to bootstrap further yields for auraBAL to increase Aura’s veBAL share, which should lead to long-term better yields for all system participants.

Assuming stagnation in yield sources, any increase in auraBAL supply will lead to a decrease in the pool yield. The DAO should anticipate this by increasing overall yield take directed to the pool.

Due to a significant increase in the voting incentive markets for veBAL and vlAURA, there has been a marked decrease in veBAL gauge vote share. The % of veBAL voting for the veBAL gauge itself has dropped by more than 60% since the start of July. Currently (Data from August 11th), only 3.81% APR for auraBAL stakers comes from the veBAL vote gauge (and the AURA earned on top of that). 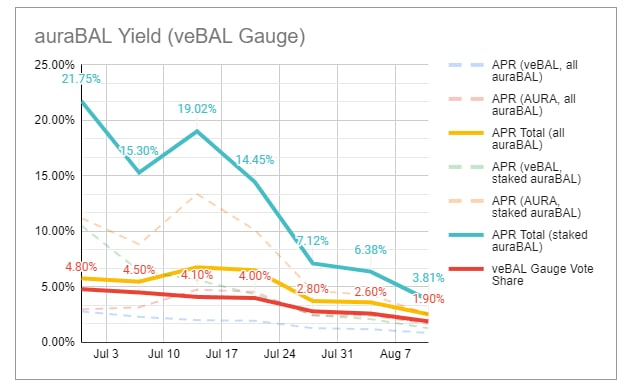 Recent growth of core pools has also led to a decrease in the amount of BAL and bb-a-USD goes directly toward the veBAL and thus auraBAL pools.

Aura BPT yields are still meaningfully higher than staking via Balancer directly, and are largely better than other Ethereum main-net yield farms at scale.

To illustrate a few examples, the following is a comparison, showing that across some of the most popular pools on Balancer and Aura, Aura provides a 3.19x multiplier on no-boost BPT deposit yield:

The introduction of auto-compounding and leverage vaults to Aura, such as one being worked on by Element, Yearn Finance, and FiatDAO, will make yields even more attractive for depositors on Aura. Due to the nature of compounding, leveraged vaults, a marginal increase in fees may not represent a big concern for a majority of Aura TVL.

Since Aura BPT deposit returns are high (relative to Balancer and other Ethereum main-net yield farms), it gives credence to the idea that top level fees could be slightly increased with beneficial effects to the system as a whole (primarily through the accumulation of more veBAL voting power, increasing the potential gauge boost of pools on Aura) if there is a new fee weighting favoring auraBAL.

To illustrate this, the following is the state of Balancer vs. Aura yields if the auraBAL fee take was increased by 5% as this proposal suggests.

Even after the fee change, the average multiplier on no-boost BPT deposit yield would still be 3.00x.

Based on the data and long-term vision / premise of Aura, it makes more sense to increase overall fee capture to 25% vs. purely redirecting rewards from vlAURA to veBAL.

It doesn’t make entire sense to slash vlAURA yield to zero, as there are holders that do not participate in the Hidden Hand vlAURA market and would thus need some headline yield in auraBAL, alongside with control over POL veBAL, as a reward for locking AURA into vlAURA. Operating without a headline yield may dissuade newly-minted AURA from being locked into vlAURA, causing potential unneeded selling pressure.

There is, however, no need to increase vlAURA yields significantly due to the strong yields currently coming from the Hidden Hand market, which will likely increase as the ratio between $ of emissions (BAL + AURA) per $ spent on gauge incentives reaches parity to ~$1. For context, eligible vlAURA holders are making approximately ~100% APR in voting incentives via Hidden Hand.

Ultimately, any option that increases auraBAL rewards should lead to long-term benefits for all system participants due to the permanence of [80/20 BAL/ETH BPT] deposited into Aura, and the increased influence and boost vlAURA holders and veBAL depositors, respectively, will have access to in perpetuity.

Aura should change the fee rates to the following:

On a technical basis, this increase will technically be allocated to vlAURA, since Aura smart contract’s maximum BAL fee take for auraBAL is 15%. Though an updated CrvDepositorWrapper contract can be deployed that redirects the additional 5.5% to auraBAL.

This proposal will await feedback from the community in “[Temperature Check] stage, but barring any significant concerns, it will be pushed to AIP status and then Snapshot once it has been up on the forum for a proper amount of time.

This vote will be a single-choice vote. You may vote “For” or “Against” this proposal, or choose to abstain from the vote.

By voting “For” this proposal, you are voting in favour of changing the fee rates of Aura in accordance with the specification set out in this proposal.

Used a combination of Dune Analytics, CoinGecko, Etherscan Analytics / CSVs, and Balancer analytics data. Some sources were lower resolution than others and rounded/treated numbers in slightly different ways.

Excellent proposal. This period of time where Aura’s emissions are high and the price is high should be taken advantage of to maximize the growth of auraBAL. Raising the fee we take on BPT deposits should help drive that growth and not have a material impact on platform TVL in my view as Aura yields will remain number one on mainnet even with this change.

This is well written. I support this proposal.

P.S. the images aren’t going to transfer to Snapshot well.

This makes a lot of sense, I support it.

good explanation and reasoning
im all for it

I also agree. This is a good proposal.

As the reasoning for it is that emissions are high, it’d be nice if this governance had some defined point when it expired. For example, when Aura emitted per BAL earned drops under 2.

Aura is so far ahead of the competition in yields on mainnet that it makes sense to be as aggressive as possible early on in the life of Aura. The moat is everything. Great proposal!

Generally agree with where that’s going directionally but it will be quite a while before the AURA earned per BAL ratio falls to that level. I think at that point the community will have pushed other proposals that have further optimized the direction of fees, so I think it’s a bit unnecessary right now.