Summary
Llama Airforce developers Alunara and Benny have developed an incentives dashboard for Hidden Hand’s vlAURA market, allowing DAOs and users to get a minute look at the effect vlAURA voters have on emissions and liquidity. This proposal requests a grant of $20,000 worth of AURA tokens to reward the work the developers have performed.

Motivation and Background
The overview page includes information like all-time revenue, emissions/ $1 spent on incentives, record earnings/ vlAURA, and revenue/ each round. The rounds page includes information like round number, $/vlAURA, deadline of each round, reward of each pool, the total reward of the pools, and personal rewards when users connect their wallets. 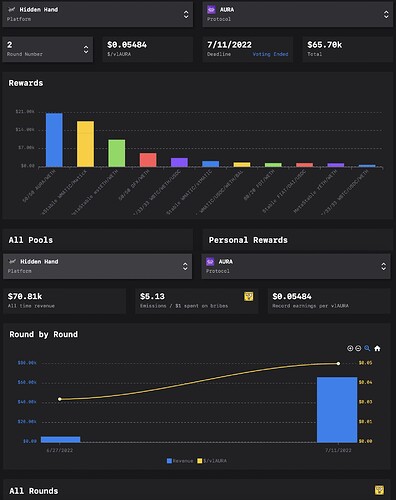 Proposal
Allocate $20,000 worth of AURA tokens (calculated using a 7-day historical moving average at the time of the proposal’s execution) from the DAO treasury to the requested receiving address.

Alunara and the broader Llama contributors has proven themselves to be aligned with the Aura ecosystem, and will be locking any tokens received, as well as maintaining the dashboard as necessary to reflect any future updates.

Voting Period
This will be left in [Temperature Check] to receive community feedback for a reasonable amount of time, then brought into formal AIP status, and left up for at least three days before moving to Snapshot for next Thursday’s voting cycle.

Voting
This vote will be a single-choice vote. You may vote “For” or “Against” this proposal, or choose to abstain from the vote. By voting “For” this proposal, you are voting in favor of granting AURA to reward the work the developers have performed to Llama Airforce’s multisig: 0xaef6ea60f6443bad046e825c1d2b0c0b5ebc1f16

Welcome to the forum, brother. Great job on the proposal, 0xMui. I’m in support.

Happy to support this. Always appreciate it when people actually do something THEN get compensated. In this case this is clearly a great dashboard to have and certainly worth the $20k.

Llama Airforce is such a great dashboard. Including the Aura HH market there and building a relationship is worth a lot. Alunara has proven to be worthy of a grant and will vote lock the Aura, support!

Definitely in support of this. The ask is reasonable considering the valuable insight Llama dashboards have provided.

in support. Good work on the dashboard Llama team!

Snapshot will be live shortly:

Aura Improvement Proposal 9 (AIP 9) requested for $20K worth of Aura tokens to be paid to the developers responsible for the Llama Air force dashboard. The dashboard provides information to vlAURA voters and to incentive providers on:

the total number of votes cast,
the value of emissions received vs the allocated rewards funded,
the value of rewards received per vlAURA, and
a record of previous votes.

The dashboard is a handy visualization with easily understood and presented data. The grant request was approved with 100% of the vote and AURA is pleased to announce that the grant has been to sent to the developer who built the dashboard. The developer and team have indicated they will lock 100% of the Aura tokens received.